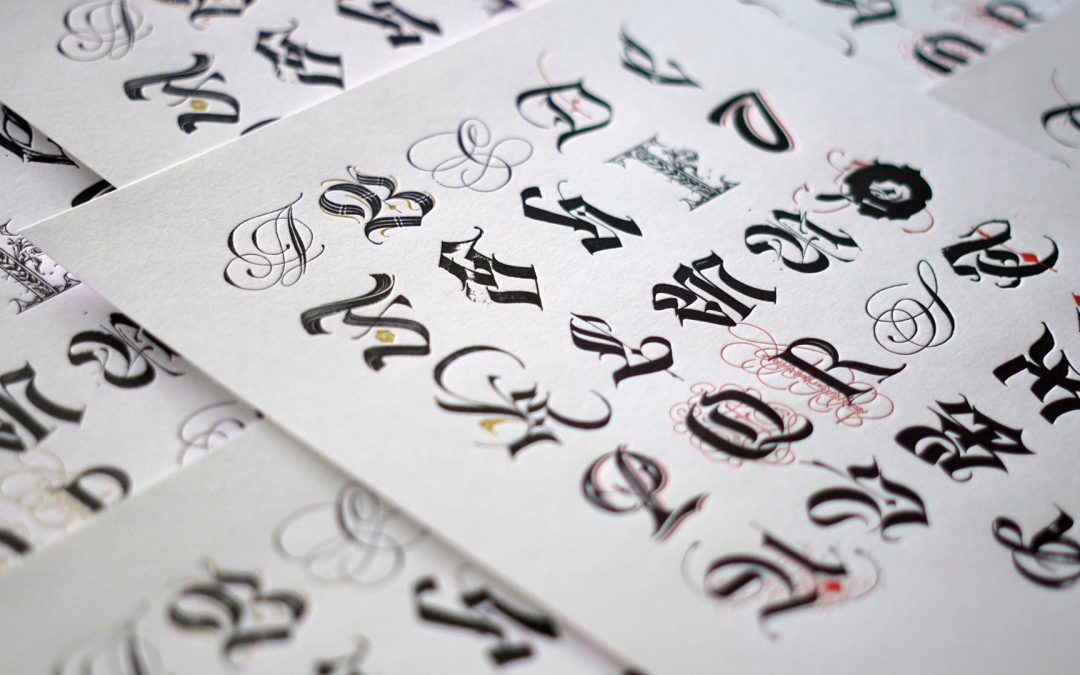 The ‘Calligraphy Masters Crew Alphabet’ was created in 2018. The idea was to have 27 characters, 26 uppercase letters and one ampersand, written by 27 members of the Calligraphy Masters Crew. The concept was hatched and managed by Daniele Tozzi, incidentally, he was also the one to deal with much of the hassle of collating, vectorising and screen printing.

We agreed on using Studio 56fili in Rome for the production as they specialise in handmade screen printing. Once Daniele posted about the concept in the Calligraphy Masters Crew Group, the 27 characters were immediately snatched up but enthusiastic members wished to add a character of their choice. Once all the characters were in, Daniele cracked on with his magic. 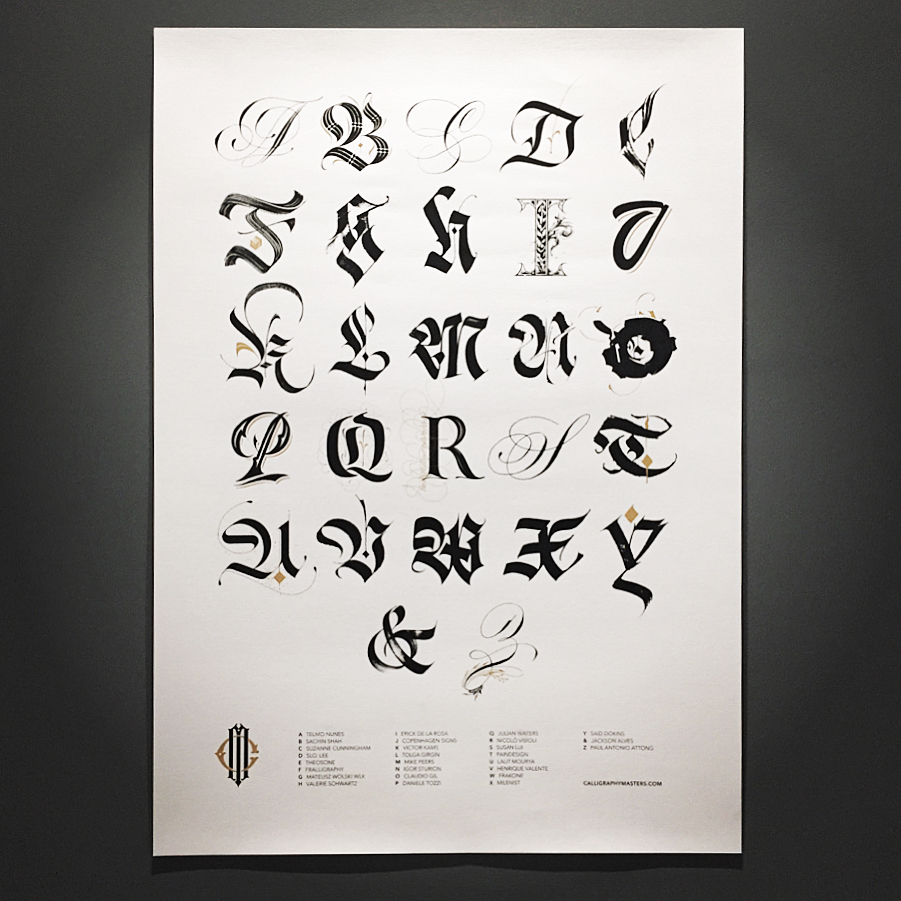 Many of us met, some for the first time, at Scriptorium Berlin in 2018. I took a lot of footage of that meeting and really should upload it so you can share these wonderful memories with the team and me. I don’t remember how long the whole process took, from the initial mention of the idea to the meeting in Berlin, all the way through the collection and collation of the letters, to the final print process, I think maybe 6months, but I might be off by a few months, I am sure Daniele knows, but I am too lazy to ask him 😀

There are so many amazing things I can tell you about that time, the emails, the collaborations, talking to members, receiving the artworks, thanking members, so much more, just writing about it now and reminiscing all brings back so many memories and emotions. The main idea, the whole concept, was and still is something super important, unique and inspiring to us as a crew.

It has been 3 years since the release of the original ‘Calligraphy Masters Crew Alphabet’. I loved the idea and the process, but it fell to the back of my mind due to a lot going on in my life both professionally and personally. Last year, 2019, NoKiss Print contacted me wanting to recreate the ‘Calligraphy Masters Crew Alphabet’ but with a difference. They wanted to use a black and a colour AND they wanted to deboss it in Letterpress.

I was ecstatic, absolutely LOVED the idea and they immediately ran with it. I was shocked at the swiftness of the turnaround time and was so grateful to them for their attentiveness. I received the prints much faster than I anticipated and after much toing and froing, more froing on my side and nearly zero toing on their side, I was in a happy place, physically and mentally, and ready to release them. 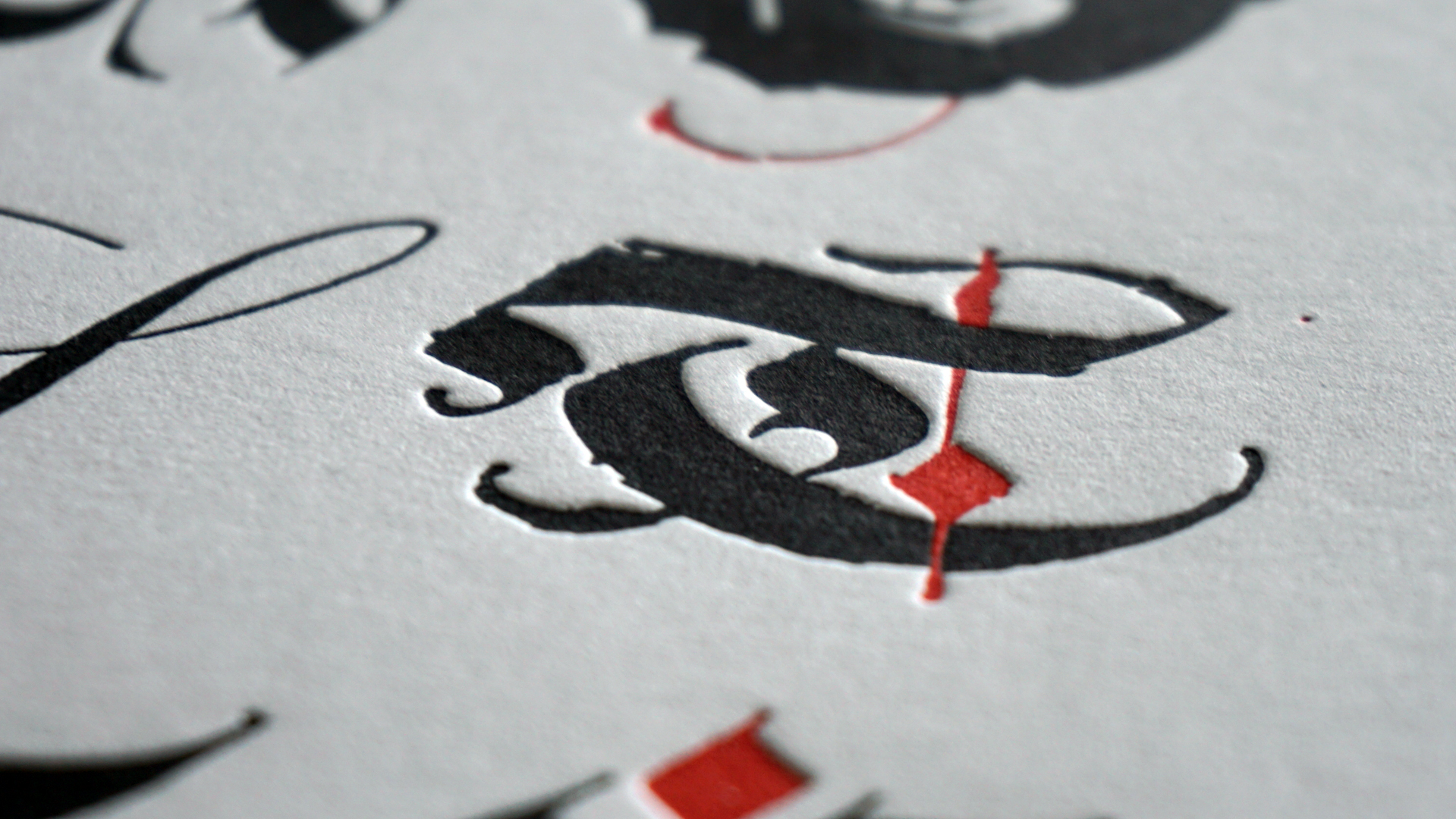 These are limited edition prints. 100 were printed, I gave 25 away as gifts to close friends as a thank you for their help for a number of things, too many to mention here. I also wanted to do a GIVEAWAY of 3 prints for the Calligraphy Masters Followers!

There are 30 prints left of the original poster released in 2018!

There is a 20% OFF discount for the first 20 people who order the NEW Letterpressed Print in two colours, using the CMNK20 promo code

I also created 10 limited packs with both the original print AND the new limited edition letterpressed print at a special combined price.

Part of the money from the sales will be invested in the next run, which will be all-new letter variations by a mixture of some of the original poster crew and new crew members. I am so HYPED about this new release because it adds another level of interest to the ‘Calligraphy Masters Crew Alphabet’ series. The other part of the sales will be funnelled into some very exciting Calligraphy Masters products which I will tell you about soon! I am so excited!

5% of each order will be donated to a Charity related to Calligraphy! I spoke with Paul Antonio about this, and he told me there isn’t really one specific charity however many guilds and societies have grants and funds to give full or partial scholarships to those who cannot afford to attend classes, lectures and workshops or purchase tools and materials. Next week, Paul and I will discuss this in a little more detail as soon as I have more information, I will share it with you. Suffice to say, that 5% will be set aside to help those in the calligraphy and lettering community pursue their goals.

If you are not part of the crew but would like your lettering to be considered for one of the upcoming prints, you can do so by taking part in the current challenge hosted on the Calligraphy Masters Challenges

You can find all the relevant information on how to participate here …….

I cannot tell you how excited I am to finally launch these Limited Edition Letterpressed Prints! They are all hand-numbered, certified, and come in their own exclusive packages with some other goodies included, so you can have a lot more fun with them.

Here is the list of all Calligraphy Masters Crew members who took part in the creation of the print:

We would love your feedback about what you have seen so far or if indeed you have a print for yourself!

Please feel free to share with your friends who might want to have one, order one yourself, or send it to a friend as a gift, and remember to #KeepWriting (accurately!)

Get the Calligraphy news!

Hi fellow Calligraphy and Lettering lovers! Be the first to learn about Calligraphy Masters News, Events, Challenges, Tutorials, and campaigns! Sign up below!

You have Successfully Subscribed!